To protect 15 northern European countries against sea level rise, a highly ambitious plan was put forward to build massive sea dams across the North Sea and English Channel, which will cut off the North Sea from the rest of the Atlantic Ocean. Although we desperately want this plan never to become a reality, future projections of high-end sea level rise and related uncertainty may warrant a solution of this proportion. Considering the high risks of such scenario’s and the long lead time for adaptative solutions, it is essential to plan for solutions if high-end scenario’s do become a reality.

An analysis on the effect of the Northern European Enclosure Dam 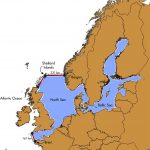 Some of you may have heard of it: the idea of closing off the entire North Sea with a gigantic dam in order to protect European countries from Sea Level rise. Sjoerd Groeskamp from NIOZ introduced the Northern European Enclosure Dam (NEED) that turns the North Sea into a massive basin (sjoerdgroeskamp.com/need). However, there is still a lack of (detailed) knowledge about the impact of this enormous and seemingly unrealistic proposal. Many questions are to be answered about the consequences and feasibility of the plan. For our MDP project, we investigated what the hydrological changes inside the North Sea basin will be if the NEED would really be built. How would the currents and sediment transport inside the basin alter if the tide disappears? How would the salinity and temperature of the water change if we are no longer connected to the Atlantic? By mapping these consequences we have contributed to gaining more insights into the unique idea of damming the North Sea.